According to recent statistics from INSEE, the vacancy rate represents some 2.8 million homes in France, or 8% of the rental stock. An additional 374,000 homes were created each year by France between 2010 and 2015. Over the same period, the number of vacant homes also increased by 3.4% per year. This rate is six times higher than between 1990 and 1999.

Vacant housing: what is it?

INSEE defines a vacant dwelling as “an unoccupied dwelling” which is either offered for sale or renting, or is already allocated to a landlord or a buyer but is waiting to be occupied, or kept vacant and without any specific assignment by the owner, either pending estate settlement, etc.

8% of the rental park is empty

This vacancy rate represents 8% of the rental stock in 2015, ie around 2.8 million dwellings. A rather worrying growth at a time when France now requires more housing to accommodate the same number of people. On the one hand, household size has fallen sharply, due to late marriages, regular breaks, longer life expectancy and an increase in the number of single-parent families. On the other hand, because we are currently facing an increase in the supply of housing twice as large as the increase in the population. But other factors also come online such as the poor condition of housing, their cost very expensive compared to the current market, their location or their size (too small). This increase can also be justified by the aging of the population, with the retirement of seniors in retirement homes without their housing being rented or sold.

They are in Mauritius!

Where are the French, potential tenants or buyers of vacant housing in France? They are probably in Mauritius, enjoying the warmth of the tropical sun, enjoying seafood at will on the most beautiful beaches of the island, or practicing water sports in the turquoise lagoons . In short, many French investors are now turning to Mauritius, to buy a second home, apartment or villa in any property. Starting from $ 500,000, they have the choice between luxurious villas in Tamarin or Grand Baie. In addition, they enjoy a light taxation with only tax payable, a tax on income set at 15%. 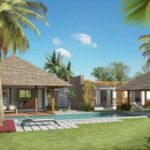